How international is the UHH?*

The purpose of this work is to show the development of the international students at the University of Hamburg from 1919, year of the foundation, to 2017. An overview by Giancarlo Marin.

I start my work with a general comparison between the total amount of students at the University of Hamburg and the amount of foreign students.

Comparison between German and international students 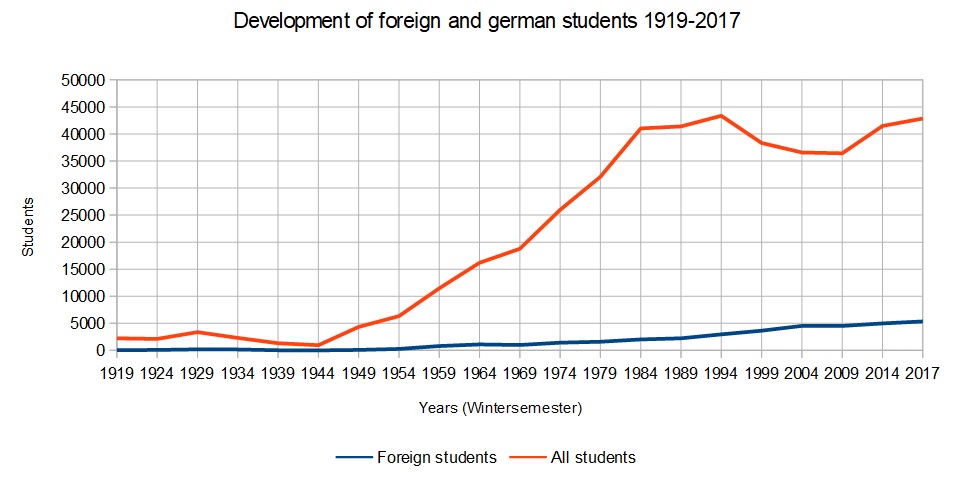 This first graphic shows that the total amount of students (red line) has continuously grown since 1944, except for the decrease between the winter semesters (henceforth WS) of 1994 and 2009. The chart of the foreign students (blue line) did not register such a decrease, although a small decrement in this period was registered too. It can therefore be said that the number of foreign students has grown continuously for the last 70 years. A more detailed representation of this growth is displayed in the next graphic and analysed in the following description. 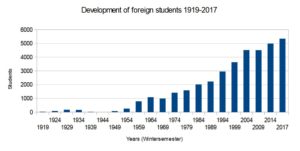 This second graphic demonstrates in detail the continuous increase in foreign students, except for a couple of periods, like between the WS of 1964 and 1969 and between the WS of 2004 and 2009. The biggest amount of foreign students was registred in the WS of 2017 with 5231 international students and the smallest in the WS of 1939 with only 24 international students. It should be said that for this analysis I did not consider the years in which no data was avaliable, like the last years of the Second World War.

In the two following graphics I compare the percentage of the foreign students in the whole history of the University of Hamburg and in its last thirty years. The average percentage of foreign students from the total amount during the whole history is approximately 8 % and the percentage in the period between 1989 (year taken as reference due to its importance, namely the year of the reunification of Germany) and 2017 is approximately 12 %. 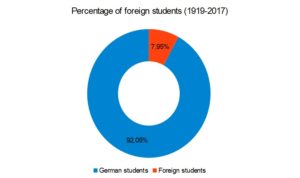 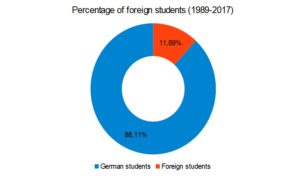 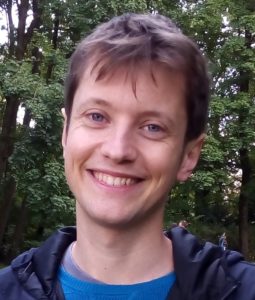 I would like to thank Mr. Gunnar B. Zimmermann, researcher at the department of History of the University of Hamburg, for his help with this project.